AngularJS Vs. ReactJS – Which to Choose (Comparison Guide) 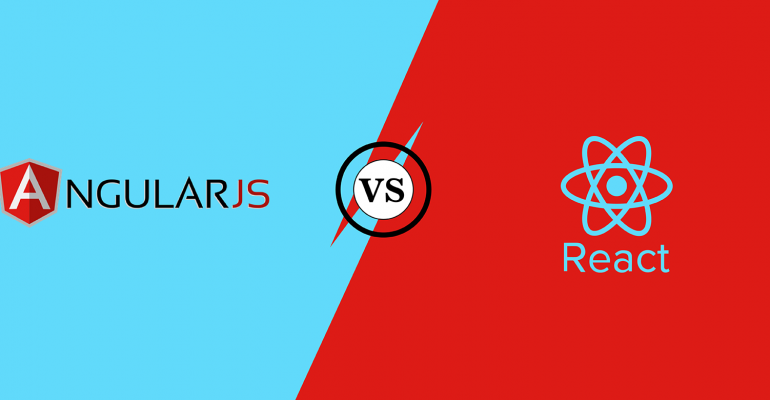 AngularJS Vs. ReactJS – Which to Choose (Comparison Guide)

When two very good development platforms are floating around in the industry, it is expected that they are under the eye of constant scrutiny and never-ending debates as to which one is better.

If we look at it from a statistical standpoint, we find that React is used by 65% of developers regularly to code and 19% who want to learn it. The numbers for Angular are quite different. Angular is used by only 24% of developers, whereas 34% are extremely keen on learning and implementing it.

Both Angular and React are Java based platforms that use JavaScript. The main advantage point with JavaScript is that it supports advanced web applications by encapsulating a package that delivers on customization and advancement.

When it comes to choosing the right kind of framework, whether it is JavaScript or website framework, it is of paramount importance. Considering the popularity of AngularJS and ReactJS, the debate on who wins the round in the clash of the titans of technologies is always hot and riddled with arguments.

Angular and React each have different approaches in their management of your platform. Angular has bundled data while React works more unidirectional and immutable data workflows.

Though both work in completely different ways, they are to be picked basis what kind of requirement and type of business that you are in. Let us give you an insight into how they each react to different performance parameters and which one emerges better and less time-consuming while being more effective.

Let us compare React and Angular in terms of their actual implementation. React is an open-source JavaScript library. For implementation, you will need additional libraries to be able to work on all necessary features. There is a need to add elements to incorporate a unidirectional flow in terms of setup, APIs, and mapping of dependencies.

AngularJS, on the other hand, has bundled up encapsulated features that provide a lot of native and easy to use options. Due to this, it automatically becomes a faster option because there are not many nitty-grits and choices that you have to get into and waste your time.

In AngularJS, the data binding works in a manner that binds your DOM (Document Object Model) to the model data that you are working on. What does this mean in terms of performance? When you have to make changes, it will result in updation of both the data and the view, not just the data. This two-way binding on the data takes time and hence impacts on the overall performance in a negative manner.

ReactJS has one-way data binding. Due to this quality, the application has a singular behavior. One-way data flow helps ReactJS tackle and resolve complexity. Due to mapped dependencies, it is able to isolate classes, and it minimizes the risk of error. It is easier to debug the components in ReactJS because of their size and simplicity compared to AngularJS, which has larger applications.

AngularJS is based on a Model-view-view-Model, which is also known as MVVM. The model MVVM has many tools like change detection, routing, navigation, HTTP implementation, and data links. This is a major advantage that AngularJS has over ReactJS. ReactJS does not have the MVVM but the MVC model. MVC stands for the Model-view-control model.

ReactJS has no option but to use additional and external libraries from Redux and Flux. These work as a controller and router for navigation control. ReactJS has this major disadvantage when compared to Angular because additional integration is very time-consuming. If the major concern is the time taken to process, then the debate of Angular vs React is won hands down by Angular.

AngularJS has the capability to reduce the web page’s loading speeds. The communication between the models used to be in an asynchronous mode. Due to this approach, it reduces the number of entrances that go into the server. It also improves the designing speed of web applications significantly. The back-end queries are removed since the part of back end queries get eliminated due to the visual interface that is provided.

ReactJS, unlike Angular, has its own Document Object Model, where all its components are attached to this model. It is the ease of navigation on the website that is enhanced. The data is displayed in a viable way without having to refresh the page multiple times. This makes the website more fluid in workflows and faster in operation.

In the war of Angular vs ReactJS, it all comes down to the scalability of the framework and, subsequently, the website. Business owners want the flexibility to scale up in proportion to their business requirements, and they want that flexibility to kick in almost immediately since their revenue depends on it.

A slow sluggish and non-agile system brings in disparities. In this argument of ReactJS vs AngularJS, AngularJS is more scalable easily. It is also a more powerfully designed framework with a robust and intuitive design basis. React is more testable and also scalable when compared to frameworks like Vue.js etc.

Despite this debate of AngularJS vs ReactJS, they each have excellent performance platforms and support from their respective communities and fan followings. Considering the difference between AngularJS and ReactJS, they both have a documentation.

Keeping in mind the differences between Angular and React, they both come from a world of different philosophies, one must decide which will suit them and which is most effective to their line of business and operation.

To keep it short, go in for React if you are seeking flexibility and simplicity. If your requirement is to boost your application and effectively manage it with tools, then Angular is your best bet.

How To Start An Online Grocery Store